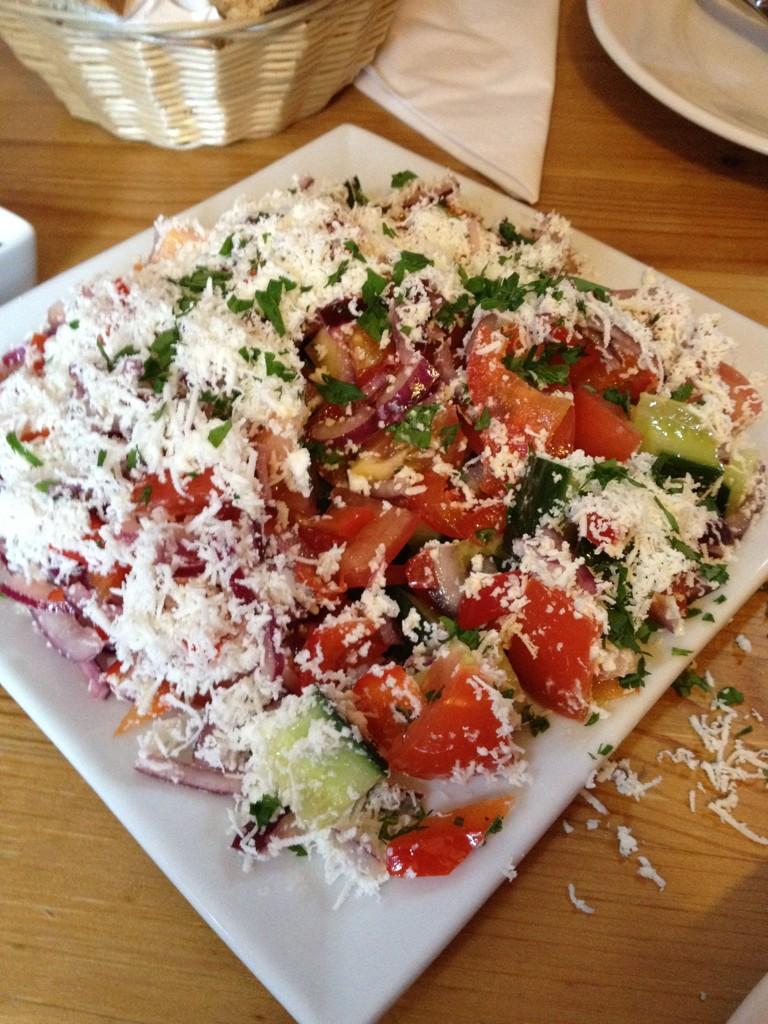 Top 10 Most Searched Businesses on Altrincham HQ in 2012

And what’s good for every magazine, TV Channel and website is good enough for Altrincham HQ

So without further ado we’re bringing you the Top 10 Most Searched Businesses on Altrincham HQ of 2012 … if you’re wondering how we did it, it’s simple – we simply used google analytics on our website for the whole year and looked how our local residents were coming to our website 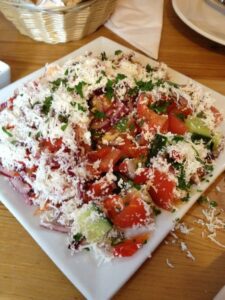 Situated on the corner of Regent Rd and Greenwood Street La Rioja has been a well established restaurant on the Altrincham dining circuit. A few months back ourselves along with Our Altrincham and Altrincham Town Centre Partnership tasted the new menu and from a veggie perspective the halloumi and melon was out of this world. There were also plenty of meat and fishy treats for those who indulge. Anybody who visits we’d also recommend the drink that owner Barry Cooperman says is like sex in drink form.

It’s also worth noting as well that high up on the searches to our website was owner Barry Cooperman, which says a lot about the individual characters of independent business. Be yourself, be memorable and customers will talk about you

Why Online Was Important For Them? Barry was a skeptic of Social Media before the aforementioned menu tasting which we tweeted at throughout. The results speak for themselves as 34 covers were through twitter on the weekend following. Read the full blog on this here https://www.altrinchamhq.co.uk/blog/la-rioja-and-twitter-marketing/

Altrincham HQ had previously worked with The Gobstopper in Hale so were really interested to see what the Gummy Worm were going to offer for Altrincham.

On our first visit local tweeter @markwinstanley spotted Reese’s Pieces, the M&M esque chocolate snack made for the ET Films, and on the second visit we saw the full stock of Lucky Charms Cereal fly off the shelves. Apparently they’re the only stockists locally of the sweet cereal

So Gummy Worm, popular and everything sweet for the kids and adults and one of the big hits of the Spooky Woo Spectacular Halloween Event this year

Why Online Was Important For Them? Still to make full use of twitter and facebook, online was still important to them because tweeters such as their neighbours next door Pitta Crepe and Our Altrincham (via Spookywoo) was able to spread word about their existence to a much wider audience than a soft launch

We would say one of Altrincham’s hidden gems, but a lot of our readers are massive fans already so maybe shining gems is a more appropriate tagline for them

It’s around 18 months since Pitta Crepe set up the only street food van in Altrincham and they’ve revolutionised lunchtimes for many office workers, retailers and residents in Altrincham. Imagine a time pre-Pitta Crepe when there only lunchtime bites were a Greggs Pasty or a Boots Meal Deal. With freshly made pitta’s, the most popular of which is the Moroccan Lamb, and sweet crepes they offer something for everybody

Why Online Was Important For Them? Simple. They don’t do any traditional form of advertising – so no newspaper ads, no flyers, no letter drops. The only marketing they do is Social Media and word of mouth and as everybody loves the food its perfect for them. They even post crepe and pitta recipes for their fans to make at home

Bit of a sad one in the Top 10 because despite being in the most searched for businesses in Altrincham, Chokko De Sushi no longer exists

Based up near Altrincham Market we didn’t visit ourselves but in this blog https://www.altrinchamhq.co.uk/blog/pitta-crepe-altrincham/ Simon from Pitta Crepe was raving about them which is why it was searched so highly

Quite a few of our networking pals used to talk about it as well so if anybody has any info as to why they closed and what the owners are doing now, we’d love to find out in the comments below so we can wish them every success in the future.

The return of Jaspers raised the important question of whether the new Jaspers should be called Jaspers or not? I guess that depends on your age as I *Smug Face* was too young to visit it the first time round

For those who haven’t been it’s situated in Kings Court, back of The Classroom bar, and fits as part of a trio of bars including High Society

It arrived a little to late to make the most of the lacklustre British Summer, but 2013 if we get some Sunshine it could see Kings Court rise again

Why Online Was Important For Them? We wish we could say they’re prolific tweeters and marketers. They’re not sadly. So far word of their existence has spread as much by word of mouth as then initial announcements they were there by @atcp1 and @ouraltrincham 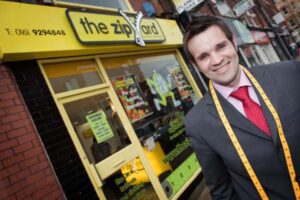 Do you remember 2011 when the business on everybody’s lips was Yogberries? I think in terms of pure word of mouth and success the business everybody has been talked about is Zipyard

And it’s entirely fitting that like Yogberries, Richard is opening up his second branch of Zipyard in Wilmslow. Altrincham and Wilmslow seem like the winning combination for new startups

Their success is down to offering a service which everybody either needs or wants and then combining it with great old fashioned customer service.

Why Online Was Important For Them? Twitter accounts for 15-20% of their business and has enabled them to fully engage with the local business community. When Richards not tweeting with customers to keep them updated on elaborate clothes alterations he’s having football banter with @trevor_holt – go look at this case study blog on Zipyard here https://www.altrinchamhq.co.uk/blog/twitter-casestudy-the-zipyard-in-altrincham/

2012 was the year that Altrincham rediscovered it’s musical and artistic routes with newbies Bloom Live, Art With A Heart, London Tap and Local Creation joining the well established Cinnamon Club

What was Altrincham missing? That’s right – an independent music shop in the vein of A1 Music in Manchester

It was great to see because in my other role i’d put on All Ages Music Events in Altrincham and Sale in previous years, but to have something for all including over 18s was great for Altrincham and I think the more cultural a town is the less problems they have in the night-time economy

Why Online Was Important For Them? Not only are they selling in the shop, they’re also selling online via ebay which is where retail is heading. A high street presence works great combined with online. They’ve also used it to highlight the charity auction of the Manchester guitar signed by a who’s who of Manchester music 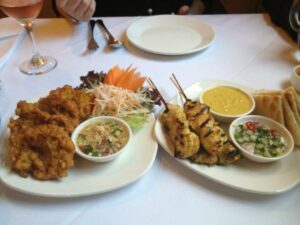 Altrincham went through a bit of a restaurant boom this year with the likes of The Olive Grove, Scalini, The Mezza Club and La Piazza joining well established restaurants in the area

We now have 20+ great restaurants in the Altrincham and Hale area which means competition is fierce.

With only 1 other thai restaurant in the areas, Phanthong’s arrivale shook things up and they launched the right way with a storm on twitter.

Why Online Was Important For Them? Like Pitta Crepe above – they launched in Altrincham with no traditional advertising. Their opening night was a taster session of local businesses and prolific tweeters and word out mouth spread amazingly well. As newbies to the area twitter has allowed them to connect with local businesses, encourage feedback on websites such as Onionring and Tripadvisor, the former of which it seems they have reached full capacity on number of positive reviews

A surprise inclusion in our top 10, but the stats speak for themselves with the number of searches alone for “chinese buffet Altrincham” since 9th Dragon opened going through the roof

Initial reaction on twitter itself for the new buffet near the market were lacklustre and at times downright damming. It didn’t fit in with Altrincham’s upmarket image and disparaging comments such as “You get what you pay for” were thrown about

Why Online Was Important For Them? Well they don’t tweet, they don’t seem to reply to emails either which leads you to think online hasn’t been important for them. Go look at the Just Eat reviews and you’ll see the majority of them are 5/6 or 6/6 reviews – seems the public have spoken as far as takeaway service goes and that online still helps them 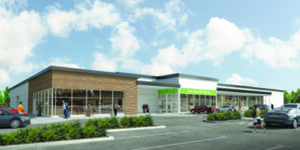 Why Online Was Important For Them? Initial online reactions from the public saw around 60% of local residents in favour of the new Supermarket. It’s more support than usual supermarket developments get and the key for them moving forward with online will be how they handle the 40% against