I’ve been blogging since 1999 – what are you waiting for?

The last few months I’ve been touring a talk around Knutsford, Wilmslow and Trafford on Successful Blogging for Business

My oh My have I been getting nostalgic about my journalist days!

Back in June 1999 I set up what at the time was one of the first ever Manchester Music websites. I called it Designer Magazine, a pretentious idea based around the Manic Street Preachers song Design for life – the idea was we designed our readers life’s through music and culture.

The irony of the website name was the design was terrible, it was done on a basic dreamweaver template, but you couldn’t argue with the traffic and before long it was regularly getting 10-15,000 readers a week; I was attracting interviews with the likes of Bill Wyman from the Rolling Stones, George Galloway, Scissor Sisters, Black Eyed Peas, Noel Fielding of the Mighty Boosh, Muse, Alan Carr, My Chemical Romance, Elbow – a who’s who of music, television and politics.

Despite being a paid journalist for publications out in the USA I was well aware that online was where it was at and that ultimately longterm more people would read online than they would in a printed magazine to 50,000 people (especially as seen as my main freelance jobs at the time was a Chicago lads mag, think FHM rather than top shelf, with 3D glasses – the music interviews were great, but girls in bikini’s won every time for the readers) 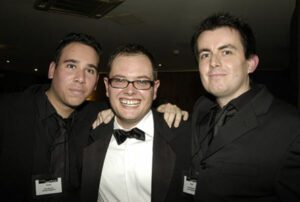 Coming out of journalistic retirement to interview Jedward 🙂

But the Real highlight?

And that readers is why blogging is important for me … and why as soon as the Altrincham HQ website was launched I knew I had to blog every single week.

I  also knew I wanted to blog with the same passion as a rock & roll journalist and draw on my own influences and passions rather than rewriting Seth Godin blogs (the guys a genius – but trust me when I say – read “The Purple Cow” and you’ll look at business coaches / marketing guru’s blogs in an entirely different light – you’ll realise its rewritten, regurgiatated, reisssued advice for people who haven’t read Seth Godin)

At the moment for Altrincham HQ I blog about Social Media, Altrincham, Town Centre issues and small business marketing, but I still blog about music marketing to help unsigned and DIY musicians…in fact my last 2 blogs have been shared by Tom Robinson (80s singer songwriter and Michael Brandvold aka mr online marketing for Britney Spears and the rock band Kiss)

Over the last 6 months there’s been a trend where a lot of my Social Media training sessions have involved blogging brainstorming sessions to bring out the real passion and substance of small businesses.

Why blog?
What to blog about?
Where to draw inspiration from?
How to put your personal stamp on to a business blog?

Would love to help with blogging for your business – call 07806 774279 or email alex@altrinchamhq.co.uk