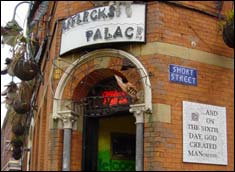 Manchester: A Tale of Two Shopping Cities & Being A Proactive Marketer

The 2 destinations, for anybody who is yet to read the full article, are the Northern Quarter and The Avenue in Spinningfields

Open the article and have a look at the full article before reading ahead – http://www.manchestereveningnews.co.uk/news/greater-manchester-news/manchesters-tale-two-shopping-cities-2508181

For those that know us well and have been involved with Altrincham HQ from the start, the reason we set up Altrincham HQ as a community focused Social Media business was seeing how proactive Northern Quarter and Chorlton based businesses were with Social Media and Marketing in general. And then looking at the traditional or inactive marketing locally

At the time I was running a 15,000 capacity arts and music festival in Manchester’s Northern Quarter called Hungry Pigeon Festival and it doesn’t surprise me at all that the area is now seen as a great blueprint for many of our smaller towns in the UK. Independence and a great community spirit are key drivers in regeneration

On the other side of this tale of 2 cities you have Spinningfields as the “upmarket ghetto” as the article describes.

Altrincham HQ visited the area for the first time in ages last week and it’s the first time we were aware of the Avenue, the retail aspect of Spinningfields, existing.

The general tone of the article suggests the area needs marketing more effectively as a shopping destination and we agree, but there’s the underlying tone of defeatism with the businesses featured

Yet a 2 minute twitter search for the brand reveals they have not exactly been proactive themselves. The main national brand twitter handle @OliverSweeney is active if not massively engaging whereas the Manchester specific account @SweeneyManc hasn’t tweeted since an initial intro in Dec 2011

Neil Smith is the manager of Philip Stoner Jewellers on the Avenue adds “We are a bit isolated and I think the problem is that a lot of people don’t know we are here. We need more marketing to put us on the map, more signage, more links with the city centre”

Small towns at times can suffer the same problems as well – the waiting for the marketing to come to you. The expectation that somebody else will do all the marketing for you

Look at the businesses that are doing well locally. 6 out of 10 retail customers that walk through Trevor Holt (@trevor_holt ) door are from twitter. Phanthong opened a restaurant less than a year ago and are already ranked the number 1 restaurant on Tripadvisor. More recently Kings Cafe in the Kings Court area of Altrincham have used to twitter to get word out about their business which is off the beaten track

Look at our Social Media for Retail Information here