How to Switch on Google’s Live Caption Feature (Video Captions)

Google have announced their Google Chrome browser has a Live Caption feature (I.e captions for videos) now built in

WHICH VIDEOS CAN IT CAPTION?
Basically any videos viewed in the Google Chrome browser – so think of all the places where you view video content

AND PHONES?
Live Caption is available the latest version of Google’s browser for Windows, Mac and Linux

The live captioning feature has been available on devices like Google Pixel phones and Samsung’s Galaxy S20 since last year.

But there’s no mention of live captioning for Chrome on iOS.

WHY ARE VIDEO CAPTIONS IMPORTANT?
Google have introduced this feature for accessibility

SHOULDN’T THE CONTENT PRODUCER ADD CAPTIONS?
Yes and no

Adding captions is possible, but can take time especially with longer videos 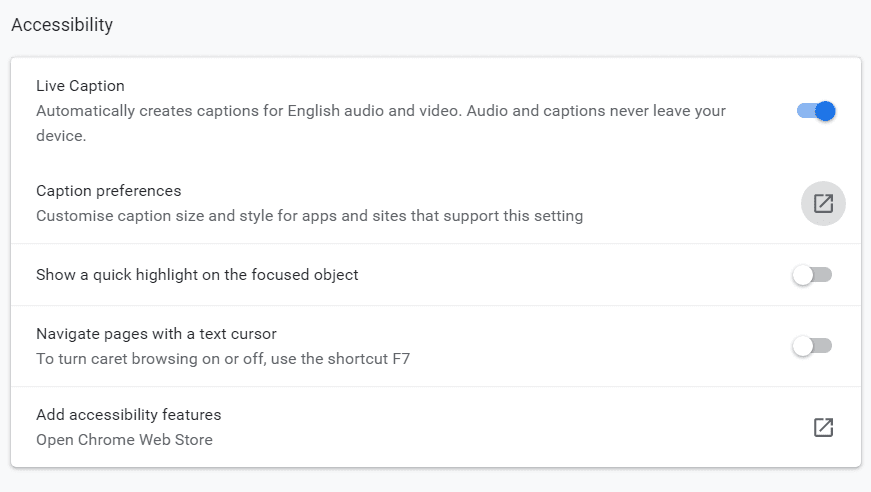 Here’s how to switch Live Captions on Android

HOW ACCURATE ARE THE CAPTIONS?
It’s pretty good – occasional there are inaccuracies due to accents / non dictionary names etc like any platform

According to Android Police, which released a report about the progress of Live Caption’s arrival on Chrome OS, Google’s feature could soon add support for transcribing French, German, Italian, Japanese, and Spanish

WILL THE SOCIAL MEDIA PLATFORMS ADD LIVE CAPTIONS?
It makes sense for accessibility and usability that the likes of LinkedIn, Instagram, Facebook and Twitter add live captions as a standard feature on their platforms

Until then – where possible add captions on your own videos

WILL YOU USE THIS FEATURE?