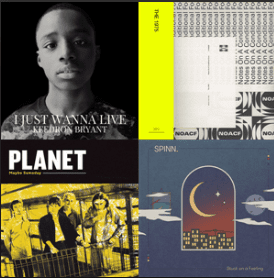 The debut edition of AM Discovered Spotify Playlist

Some new music from bands you love

Some new bands that you haven’t heard of

A wide variety of genres

As you know before working in Social Media Marketing, I worked in music for 14 years

Interviewing the likes of My Chemical Romance, Panic! At The Disco, Paramore, Johnny Marr, Run DMC, So Solid Crew and so so many

I put on gigs from the likes of Drive Like I Do (The 1975), Catfish & The Bottlemen, Bombay Bicycle Club, Dear Eskiimo (The Ting Tings), Athlete, Kids In Glass Houses, Reverend Sound System (Reverend & The Makers) and many more

KEEDRON BRYANT – I JUST WANNA LIVE
The acapella version of “I Just Wanna Live” has gone viral in the US, but if you mentioned the name Keedron Bryant in the UK barely anyone would recognise the name

Barrack Obama and Lebron James shared it, it got viewed over 3 million times, Warners signed him and recorded the studio version you hear now

Truly one of the best vocals you’ll hear all year and it’s a “What’s Going On” or “Where Is The Love” for 2020 with lyrics such as ““I’m a young Black man/Doing all that I can/To stand.”

That a 12 year old has to sing the words “So many thoughts in my head. Will I live or will I end up dead” is a tragedy

Their debut album which saw them described as “Spinn are the greatest export from Liverpool since Brookside” and “the sound of long summer days spent listening to Johnny Marr playing guitar and harks back to a time before Morrissey went full on gammon” there was a sense that Spinn were a great band on the edge of breaking through.

“Stuck On A Feeling” sees the 4 lads from Liverpool broaden their horizons, soak up some new influences and look at McCulloch and Sergeant rather than Morrissey and Marr. This is Echo and The Bunnymen distilled into a 3 minute 30 seconds guitar pop song.

Mastermind is a trap-wave artist and following “Wave Time” in 2019 and “War” earlier this year, “Losses” is his 2nd release of 2020

Raised in Rusholme, originally from Somaliland, he’s one of 8 kids in the family and this track talks about the struggles and life

Over the years his work has matured and “C’est La Vie” is his latest release. Ulrik’s 3rd of 2020 so far

Sweden has such an amazing array of talent where the song and melody is king. What these artists don’t always do is breakthrough to an international audience and perhaps it’s about time Ulrik Munther has the international acclaim he deserves

CAT BURNS – F*CK BOY
“F*ck Boy” was actually out in 2019, but I’m featuring it here as Cat Burns is making waves on Tik Tok right now

Normally Cat would be out busking on the streets earning a wage she’s now posting on Tik Tok daily, has over 280,000 followers and has videos on the platform that have reached over half a million

Alex McCann worked in the music industry for 14 years writing for the BBC, Rocktribe (Now known as Rock Sound), Designer Magazine and publications across the UK and the US

Over the years he has interviewed everyone from My Chemical Romance to Muse, Busted to Elbow, Mark Owen (Take That) to Bill Wyman (The Rolling Stones” and has promoted live music events from the likes of Drive Like I Do (The 1975), Catfish & The Bottlemen, Bombay Bicycle Club, Dear Eskiimo (The Ting Tings), Athlete, Kids In Glass Houses, Reverend Sound System (Reverend & The Makers) and many more

He works with young people, colleges and universities on the importance of personal branding, social media and marketing