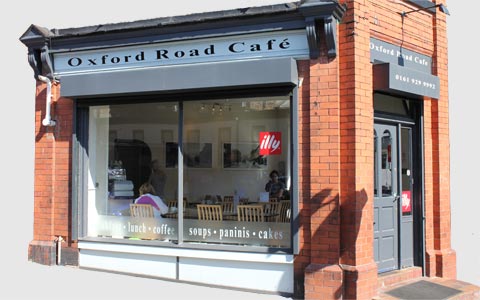 1. #Peegate as it’s become known was a youtube video that went viral after a customer discovered that the bar, Simple, in the Northern Quarter has hidden cameras in the gents toilets. It took hundreds of comments on the bars facebook page for the management team to acknowledge the complaints and then they responded without an apology and a throwaway comment about “always wanting to trend on twitter”. The story has since made Manchester Confidential and the Manchester Evening News

2. Which has reported that Three Mobile has been reporting customers who complain on twitter as spam in order to get their accounts removed

3. Visit Altrincham reported that a couple of businesses on their directory have had negative reviews on their customer service which sparked a debate with other local businesses and voluntary organisations

Oxford Road Cafe is somewhere in Altrincham I don’t frequent as much as i’d like, but every visit has been remarkable.

Firstly, the food is fantastic. As veggie it’s often hard to find a breakfast that isn’t just the meat version minus the meat, but every time i’ve ate here the carnivores have been looking at my plate with jealous eyes

Secondly, the customer service is 2nd to none. As I said we’ve only been in a few times, but from the very first visit we were given a massive warm welcome, when we paid it wasn’t take the money it run -they were genuinely interested in what we thought of the meal… and lastly and importantly, every time myself and my partner in crime Mark Winstanley have been on an Altrincham mooch the management / owner have always remembered us and said hello

A few months ago the inside of my Doc Martens started falling apart. The rest of them were perfect and hence didn’t need a new purchase.

Where am I going to go when I next have a big shoe repair? Timpsons of course, as will several of the followers that read the tweet